In today’s article, we wrap up our introductory look into the story of the Bible and where major events fit in a timeline of world history.  As we switch to the New Testament (NT) we narrow our window of years.  The Old Testament was written during a period of a thousand years.  The Holy Spirit inspired the writing of the 27-books of the NT in around half a century.

You will notice our timeline starts by listing the birth of Jesus in 4 BC.  The system we use to number the years of our calendar is not divine.  In AD 525, monk named Dionysius Exiguus simply made a mistake when he began his system of marking dates by the virgin birth of Jesus.  Modern historians use Luke’s mention (ch 2:1-2) of Caesar Augustus and another Roman official named Quirinius, to date the birth of Christ as occurring in 4BC.  This in turn, places his crucifixion, resurrection, and ascension in around AD 30.

The first four books of the NT tell the story of the life of Jesus on earth.  Matthew, Mark, Luke, and John end with a resurrected Jesus instructing his apostles to, “Go therefore and make disciples of all nations,”-Matthew 28:19.  The gospel message of Jesus virgin birth, sinless life, death, burial, resurrection, and ascension back to heaven contained in these books is the basis of our faith and hope for eternal life.

The history of the early church is told in the book of Acts (of the apostles).  Luke wrote Acts (around AD 60-62) and was with Paul in Rome where the apostle is in prison.  The timeline of events and the date when a book was written can differ.  In fact, the book of Acts was not the first book of the NT to be written.  Most historians believe either James or Galatians was written first (around AD 45-50).  The entire NT was written over a period of less than 70-years.  The timeline attempts to put the books in the approximate order in which they were received.

The books from Romans to Jude are called epistles (letters).  They were written by inspired men (II Timothy 3:16) to either churches or individuals.  God’s instructions to those early Christians apply to us today!  The Bible ends with a message of hope.  The book of Revelation proclaims the victory of Christ and his church over trials, plagues, and death.  We look forward to, “a new heaven and a new earth,”-Revelation 21:1, where the saved will live with God!

In our final lesson we will put it all together and learn to navigate using the landmarks of the Bible. 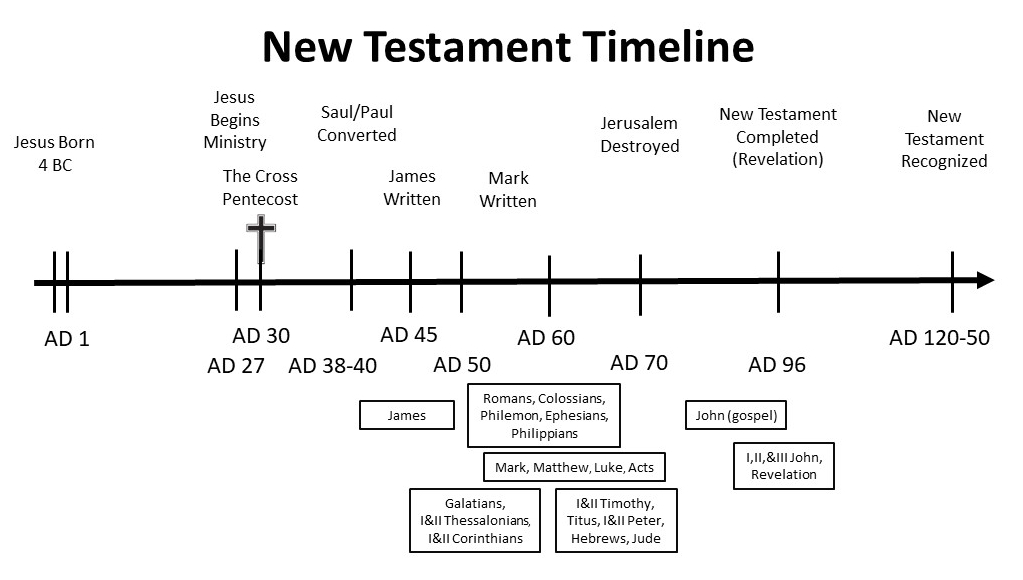